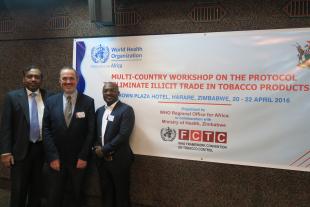 The workshop presented a good opportunity for promoting the ratification (or accession) of the Protocol to Eliminate Illicit Trade in Tobacco Products. The Convention Secretariat was represented by a member of the Panel of Experts on the Protocol established upon mandate from the Conference of the Parties.

The participants were drawn from various sectors including those that could have a role in the implementation of the Protocol once that enters into force, including public health, customs and revenue authorities, trade, justice and foreign affairs. Representatives of regional economic intergovernmental bodies were also invited to attend.

At the end of the workshop participants have had a better understanding of the requirements of the Protocol and the process needed for its ratification by the Parties to the Convention in the African region. It is also expected that the workshop will result in an increased commitment of the governments whose representatives participated to ratifying, acceding and implementing the requirements of the Protocol.

To date 16 countries have ratified the Protocol, from which 3 are from the African Region (Burkina Faso, Congo, Gabon).