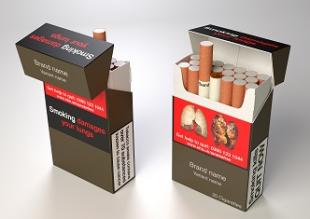 The UKs upper chamber of Parliament, the House of Lords, voted on 16 March 2015, to require that tobacco products are sold in standardized packs. The government plans for the law to become effective in May 2016.

The vote will bring the UK into line with Ireland, which approved similar rules earlier this month, and Australia as the only countries to introduce standardized packs for cigarettes in an effort to curb the appeal of smoking.

Members of the House of Lords discussed the regulations, and considered the benefits of introducing plain packaging, primarily reducing the appeal and attractiveness of tobacco packs, and improving the visibility of health warnings on packets. A fatal motion was proposed to block the regulations, expressing concern about the effectiveness of standardised packaging, the timescales to introduce them, and whether they could lead to difficulty differentiating between legal and illegal packs. The fatal motion was debated and withdrawn, and the regulations were agreed.

The Standardised Packaging of Tobacco Products Regulations 2015 relate to the retail packaging of hand rolling tobacco and the retail packaging and appearance of cigarettes. The Regulations require the use of specified standard colours for all external and internal packaging of cigarettes and hand rolling tobacco and would only permit specified text (such as the brand and variant name) in a standard typeface; they will not affect other labelling requirements for tobacco products such as health warnings and fiscal marks or features such as authentication markings and security feature. The Regulations permit only specified shape or type of packets and set a minimum amount of tobacco or cigarettes in each individual packet.