Trinidad and Tobago: New regulations on picture warnings approved by the Senate 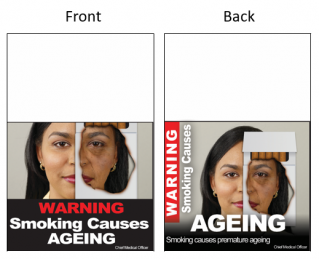 Picture warnings are now at arm’s length in Trinidad and Tobago after the Senate has approved new Regulations requiring them on 9 February 2021.

This ends a long history of preparatory work that contained various milestones. The Tobacco Control Act, adopted in 2009 and the Tobacco Control Regulations, 2013 contained requirements for two sets of 12 picture warnings. However, as some of the images were to be taken from the EU library and the matter of permissions has not been sorted out, the 2013 Regulations were not implemented.

As a next step, the Tobacco Control (Amendment) Regulations, 2019 were approved by the Senate on 9 February 2021 and by the House of Representatives on 12 February 2021.

The new Regulations introduce two sets of eight warnings that, based on the 2013 Regulations, will rotate yearly. The pictures in these warnings originate from the CARICOM database. In accordance with Trinidad and Tobago’s regulations, 50% on the front and back of the packages is the specified size. It was stated by the Minister of Health that a moratorium period of one (1) year would be given to current licence holders which ends on 23 March 2022. Thus, presumably picture warnings will appear in 2022.

In accordance with Trinidad and Tobago’s regulations, the images received in its original form had to be edited to comply with the size and location requirements, specifically to be placed on the lower half (50%) of the front and back panels of each pack in a rectangular format.

More information could be sought from the Tobacco Control Unit of the Ministry of Health, Trinidad and Tobago (at tobaccocontrolunit@health.gov.tt).