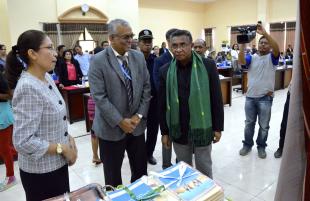 On 29 May 2015, the Prime Minister of Timor-Leste, Dr. Rui Maria de Araújo opened the National Advocacy Workshop to celebrate World No Tobacco Day 2015. Ministers, Parliamentarians and representatives from UN agencies attended the event which was organized by the Ministry of Health and the Cabinet of the Prime Minister, with support from the World Health Organization.

In a country where 70% of men use tobacco, the Prime Minister called for urgent action to protect the health of all citizens. He demanded all Government Ministries to declare their public buildings tobacco free, including schools, universities, and public transport.

Furthermore, he called for a ban on tobacco advertising and for regulating the display of tobacco products in shops and kiosks throughout the country. The Prime Minister signalized that drafts for tobacco control legislation will be introduced into Parliament soon while emphasizing the importance of concrete action during the intermediate period.

Vice-Minister of Health, Ana Isabel Fatima de Soares, highlighted in her address the important contributions of the Ministry of Health in promoting tobacco control. I hope that with the collaboration of all sectors, we can contribute to the reduction in the number of tobacco users in Timor-Leste, in order to protect all our citizens, especially the new generations, from tobacco, she concluded.

Over the past 2 years, the Ministry of Health, with support from WHO, has overseen the development of a comprehensive tobacco legislation. The tobacco control strategy has been integrated into the National Strategy for Prevention and Control of Noncommunicable Diseases (NCDs), Injuries, Disabilities and Care of the Elderly 2014-2018, a national media campaign against tobacco has been launched and all public health facilities have been declared to become tobacco free zones in 2015.