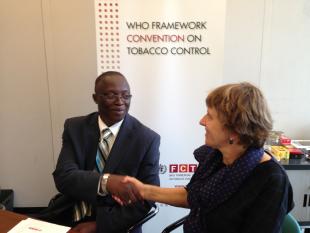 Dr Vera da Costa e Silva met Mr Omar Sey, the Minister of Health of the Gambia during the 136th session of the WHO Executive Board. Dr da Costa e Silva explained the importance of Parties speeding up ratification or accession to the Protocol to Eliminate Illicit Trade in Tobacco Products. The Minister stated that he is committed to taking immediate action on accession upon returning home. He also indicated that he is promoting implementation of the WHO FCTC in the Gambia, as well as advocating for the Convention in regional and international forums.

The Minister noted his satisfaction with the outcome of the needs assessment that the Convention Secretariat jointly conducted with the Government of the Gambia in 2012, and shared the progress made since then. Following the recommendations of the needs assessment report, tobacco taxation has been increased and a multisectoral coordination mechanism established. A  Tobacco Free Gambia campaign was also launched in February 2014 with the support of the WHO Regional Office for Africa and the Bill and Melinda Gates Foundation.