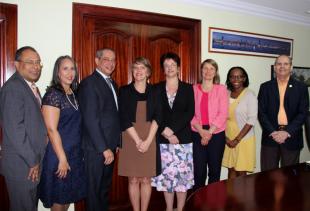 During the 2.5-day workshop, Parties to the WHO FCTC shared with one another experiences about the process of ratification of the Protocol, as well as the implementation of provisions of the Protocol, including the tracking and tracing system. Participants from health, finance, customs, justice and other sectors of government discussed with experts of the Convention Secretariat, the WHO Regional Offices for the Americas, and representatives of the World Customs Organization on how to move forward in the ratification of the Protocol. While all WHO FCTC Parties expressed an interest and the will to become Parties to the Protocol, several obstacles were mentioned: the interference of the tobacco industry, challenges in multisectoral collaboration, changes of government as well as a need for more information on good practices of implementation of Protocol provisions.

With the occasion of the workshop, the Head of Secretariat gave an interview to the Panamanian TV network Telemetro, also referring to Panamas achievements in tobacco control and the challenges it faces: