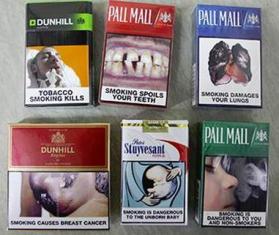 With the entry into force of the 2014 Commencement of the Tobacco Products Control Act, all packaging of tobacco products in Namibia is required to bear both pictorial warnings and textual messages from 1 of April 2015 on. The warnings have to cover at least 60% of the principal display areas of packages.

The original Tobacco Products Control Act dates back to April 2010, and covers a broad range of issues such as advertising, sales of tobacco products to minors and smoking in public places, thus adapting the countrys legislation to the requirements of the WHO Framework Convention of Tobacco Control.

The elaboration of the regulations on tobacco package warnings has been considerably slowed down due to heavy pressure by the tobacco industry. According to former Minister of Health, Dr. Richard Kamwi, Namibia has received a multitude of warnings from tobacco companies claiming that the regulations were in conflict with international trade treaties, including threats of taking the country to court.

Having resisted this pressure, Namibia has now become the fourth Party in the African region to enact pictorial warnings on cigarette packages.