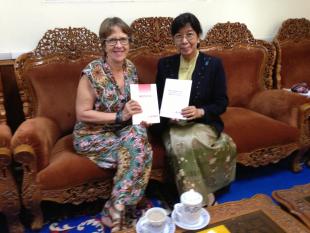 Dr Vera Luiza da Costa e Silva, Head of the Convention Secretariat, met Dr Thein Thein Htay, Deputy Minister of Health of Myanmar, today, in advance of the Multisectoral Workshop for Parties to the WHO FCTC in Asia to Promote Ratification of the Protocol to Eliminate Illicit Trade in Tobacco Products, which is due to start tomorrow. Heads of departments relevant to tobacco control of the Ministry of Health also participated in the meeting.

Dr da Costa e Silva thanked the country for organizing the first multisectoral regional meeting aimed at promoting ratification of the Protocol. This meeting is the first that the Secretariat intends to organize in the different WHO regions.

The Head of the Secretariat also referred to the countrys latest achievements in tobacco control and stressed the importance of proper enforcement. She referred to the fact that mens smoking is visibly very prevalent, while women mostly use chewing tobacco and betel  and, at the same time, emerging forms of nicotine use, such as electronic cigarettes, have also found ways to reach customers.

The Deputy Minister explained that the country follows with interest developments in international tobacco control, including, among others, the recent smoke-free legislation in China and the introduction of plain packaging of tobacco products by Australia. She explained that in spite of the progress made by Myanmar in recent years, achieving full participation of non-health sectors in tobacco control efforts is still to be strengthened, especially because of the strong influence of the tobacco industry.