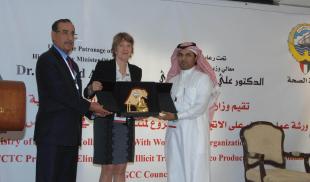 Representatives of different government sectors from Bahrain, Kuwait, Oman, Qatar, Saudi Arabia and United Arab Emirates came together at the second subregional workshop to promote entry into force of the Protocol to Eliminate Illicit Trade in Tobacco Products from 23-24 March 2015 in Kuwait City.

The workshop was kindly hosted by the Government of Kuwait and co-organized by the Convention Secretariat and the Ministry of Health of Kuwait.

Participants from health, finance, customs, justice and other sectors of government discussed with experts of the Convention Secretariat, the WHO Regional Office for the Eastern Mediterranean and representatives of the Executive Board of the Health Ministers Council of the GCC which next steps they should take to come closer to Protocol ratification/accession.

Several Parties identified the lack of multisectoral coordination as a key obstacle to becoming a Party to the Protocol. In addition, more information about good practices for implementation of Protocol obligations is required.