Jamaica: Workshop on the prevention of tobacco industry interference and follow-up actions 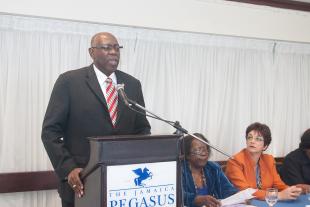 A workshop was held on 2-3 June 2015 for government officials to promote implementation of Article 5.3 of the Convention. The workshop was one of the activities that followed the joint needs assessment exercise, undertaken jointly by the Government of Jamaica and the Convention Secretariat and its partners in August 2014.

The workshop was successful and made a tremendous impact. The main consultation session was held on the 2nd of June and featured participation of a wide range of stakeholders from various arms of the Government.

The session opened with greetings from PAHO/WHO country office in Jamaica, the UN Resident Coordinator and also featured a keynote message by the Honorable Minister of Health, Dr Fenton Ferguson. The PAHO/WHO regional office also participated in the meeting.

The meeting benefited from the traditional support from the Jamaican civil society, including the Jamaica Coalition on Tobacco Control, that show-cased examples of tobacco industry interference with the work of government officials.

The workshop resulted in the development of a set of recommendations and identified the way forward to strengthen implementation of Article 5.3 in Jamaica. The planned next steps include the development of a Government Circular throughout the Ministries to require civil servants to comply with the requirements of Article 5.3 of the Convention and the recommendations of its implementation guidelines, adopted by the Conference of the Parties in 2008.

As a result of the information received during the workshop, the Ministry of Justice has undertaken immediate action and arranged for a series of internal meetings for key informants that led the discussions during the workshop; during the months of August and September, various departments in the Ministry will be provided information and trained on the overall mandate of the WHO FCTC, the relevance of Article 5.3 of the Convention in the actions to safeguarding civil servants from interference by the tobacco industry.

Also as a result of the workshop, further actions were taken at the level of parishes. At a recent meeting the Mayors of the various parishes were informed on the obligations of Jamaica under the Convention in relation to article 5.3, the importance of this article and the actions to be taken by Mayors and parish councils in avoiding tobacco industry interference. Mayors have expressed their desire to have the health department proceed with additional presentations at other parish council meetings.