Ireland: legislation on plain packaging passed by the Seanad 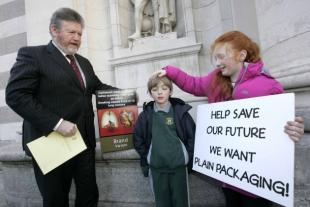 Ireland has become the first country in Europe, and it is second in the World, to pass legislation requiring plain packaging for cigarettes and tobacco products.

The Public Health (Standardised Packaging of Tobacco) Bill has passed all stages of the Oireachtas after completing its passage through the Seanad on 3 March 2015. It will now go to the President for his signature within the next five to seven days.

This is a measure that will protect our children from ever taking up cigarettes and also serve as a stark reminder to those of us who are smoking that each time we take out a cigarette well see that graphic image on the box that this is an addiction that will kill one in two people who become addicted to it in this country – Minister?for Children and Youth Affairs, Dr James Reilly said.

All forms of branding, including logos and colours will be banned and all products will have have a uniform packaging with pictorial health warnings.

The requirement will be fully implemented in May 2017, and packs produced after May 2016 will need to carry the new warnings.

The measure is in line with the requirements of the Article 11 of the Convention and its implementation guidelines. According to the latter, plain packaging increases noticeability and effectiveness of health warnings and messages and also address industry package design techniques that may suggest that some products are less harmful than others. For more information on the possible impact of plain packaging please see the presentation given on the matter at the celebration of the 10th anniversary of the entry into force of the WHO FCTC, on 27 February 2015, available at: http://www.who.int/fctc/mediacentre/news/2015/ProfKarineGallopel-Morvan_PlainPackagingEffectiveness_27Feb2015.pdf?ua=1.

Ireland was also the first country to introduce fully smoke-free workplaces in March 2004. In October 2013, then Minister for Health, Dr James Reilly, launched a new tobacco-control policy entitled Tobacco Free Ireland, that envisages the country to become tobacco free by 2025.