India: sensitization campaign on “Dry Day for Tobacco” in Delhi 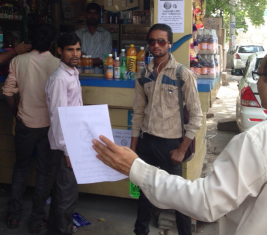 The Delhi State Government launched an awareness initiative to inform about the health consequences of tobacco use, in particular chewing tobacco, on 30 April 2015.

Dry Days have been held since 2013 on the last day of each month, with appeals to the general public not to use tobacco products and to vendors not to sell them on this day. In addition, these days are used to conduct intensive awareness and enforcement drives. On 30 April 2015 the State Government launched a sensitization campaign on the health consequences of tobacco consumption. By giving talks and distributing leaflets at selling points, a total of around 950 vendors and 3400 members of the general public were reached directly, additionally the event was covered in various media

This effort of public education on the subject comes as a reaction to the resistance the State Government is facing in its attempt to ban chewable tobacco in its legislation, as Dr S.K. Arora, additional director in the Delhi Government’s Directorate of Health Services, points out: Once the ban was notified, multiple petitions were filed in court against it because of which we were facing a lot of difficulties to implement the ban. Therefore we adopted a novel way to generate public opinion by educating and sensitising. The Delhi High Court had earlier in April demanded the State Government not to take coercive action against tobacco sellers before the hearing for the case on 20 May 2015.

Earlier initiatives by the Delhi state government on Dry Days include an information campaign on the ban on tobacco advertising on 28 February. In addition to providing information to the general public and vendors, 60 shops were raided for illegal advertisement, 31 of which were fined. Furthermore, shops were provided with signs informing about the ban of sales to minors.

Smokeless tobacco, especially chewing products, like gutka or zaini, have a high prevalence in India, and are known to cause various diseases including mouth cancer.

Check the image gallery for more photos from the event.