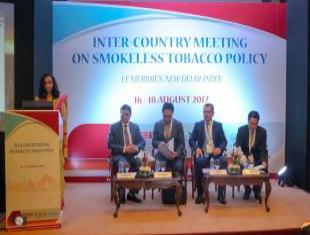 Inter-Country Meeting on Smokeless Tobacco Policy was organized by the WHO FCTC Global Knowledge Hub on Smokeless Tobacco, NICPR from 16 to 18 August in New Delhi. This meeting facilitated an exclusive discussion among experts on smokeless tobacco (SLT) policy, a discussion with potential global impact. The meeting took into account the policy progress on SLT control under selected Articles of WHO Framework Convention on Tobacco Control, in comparison with cigarettes and other smoking tobacco products, and highlighted the challenges faced and the opportunities ahead. The objective of the meeting was to propose recommendations that could be used by the countries in their SLT prevention and control work and could be brought to the attention of the Conference of the Parties, the governing body of the WHO FCTC.

Prof. Mehrotra addressed the gathering and updated on the status of the smokeless tobacco. He further added “the South-East Asia region is home to 25% of the world’s population and of 80% of the world’s smokeless tobacco users, most of them living in “Bangladesh, India, Myanmar and Nepal”. Majority of the SLT products also contain areca nut, which is carcinogenic in itself, as well as flavoring agents that are added to them to increase their attractiveness. This presents a serious public health concern for the region and requires implementation of comprehensive SLT prevention and control measures by governments and all relevant stakeholders.” Dr Tibor Szilagyi, representing the Secretariat of the WHO FCTC, which established and provides support to the Knowledge Hub, noted that “this meeting of the WHO FCTC Secretariat’s Knowledge Hub, the first international gathering it hosts, has the unique opportunity to advise on policies that would help 350 million smokeless tobacco users worldwide, and also has the potential to prevent future use, thus contributing to the scaling up of FCTC implementation.”

Representatives from the Bangladesh, Bhutan, India, Maldives, Myanmar, Nepal and Sri Lanka shared their experience in implementing measures to control smokeless tobacco and referred to good practices from their countries.

Some new policy approaches were also presented. For example, the new betel tray without tobacco that is being promoted in Sri Lanka or the establishment of new testing laboratories specially focusing on SLT in India, including one in the National Institute for Cancer Prevention and Research, the banning of manufacture and sales of smokeless tobacco by Bhutan, several states of India could be considered practices that are instructive for all countries facing the burden of SLT use around the globe.

A report prepared beforehand by the team from Knowledge Hub presented a comprehensive review of the progress made internationally in the prevention and control of SLT use, providing an excellent background on how the requirements of the Convention are used in case of this group of tobacco products. The team of the Knowledge Hub presented the work during the meeting through presentations and the launch of a series of factsheets. Expressing their concern over the increasing SLT use prevalence in several high burden Parties, the experts and country delegates made some vital key observations. It was noted that the use of SLT is widespread, especially among countries of South-Asia region; however, there is inadequate implementation of FCTC provisions in case of SLT products, and the respective policies lag behind those that address smoking tobacco. Many countries have not included SLT products under their respective tobacco control laws. The capacity to test the contents of SLT is insufficient. Unlike cigarettes, several countries do not mandate health warnings on SLT products. The experts noted that there is a need for greater focus on SLT relevant policies such as mass media campaigns; prohibition on advertisement, promotion and sponsorship; and cessation intervention.

The 3-day meeting concluded with a series of recommendations that, if implemented, could significantly reduce the burden of smokeless tobacco and improve the tobacco control policies globally.