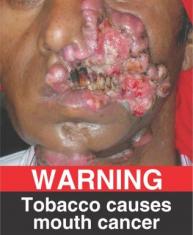 “We have issued a notification today which will make it mandatory for tobacco companies now to devote 85 per cent space on the cigarette packs or any other tobacco products for pictorial and textual warnings against the perils of tobacco,” announced health minister Harsh Vardhan. “Tobacco means only death. I have seen this closely, effects of tobacco as an ENT surgeon,” said Vardhan, who has been a practicing doctor.

India now equals Thailand in requiring pictorial warnings covering 85 per cent of both sides on cigarette and other tobacco products packages.

Implementation will take place from 1 April 2015, which is intended to give time to tobacco companies to change their packaging.

UPDATE: On 1 April 2015, the notification is kept in abeyance.