Hungary: plain packs on the shelves 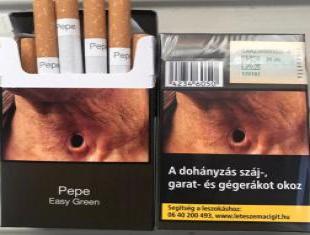 Hungary is now officially the 5th Party to implement plain packaging, as an advanced measure under Article 11 of the Convention.

From 20 August 2016 all cigarette packages need to carry pictorial health warnings of 65% of the front and back of packages. The Decree 239/2016 (of 16 August 2016) of the Hungarian Government also requires that new cigarette and roll-your-own tobacco brands that will be introduced on the Hungarian market after 20 August 2016 has to be in a uniform plain packaging, void of brand logos.

The first such brand, “Pepe”, now appeared on the shelves in plain packaging. Eventually, all cigarette and RYO tobacco products are to be sold in uniform packs from 20 May 2019.

Plain packaging is indeed an important demand-reducing measure diminishing tobacco products attractiveness and stopping tobacco companies from using packaging as a form of advertising and promotion. The unified design increases the effectiveness of health warnings and takes away the temptation for younger people to start smoking.

The amendment of the Law on the Protection of Non-smokers which entered into force on 1 January 2012, followed by Law on the Suppression of Smoking in Juveniles and the Retail Trade of Tobacco allowed Hungary to make significant progress in tobacco control and to become an example for Parties seeking to enhance the health of their citizen. Through the different governmental measures, the country significantly reduced selling sites and imposed restrictive access to tobacco products for minors as well as introducing smoking ban in public places.

Prime Minister Viktor Orbán was awarded by the WHO for his countless efforts to reduce smoking and protect non-smokers by following and implementing the WHO FCTC in his country.