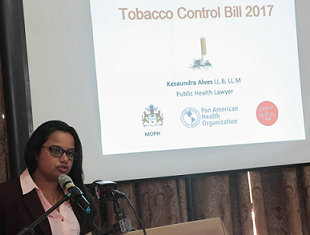 The Parliament of Guyana passed the Tobacco Control Bill on 27 July and made a big step forward fighting the devastating effects of tobacco and implementing policies in accordance with the WHO FCTC. As Honorable Minister of Public Health, Volda Lawrence, said the bill focuses on saving lives and ensuring that “healthy labour force and productivity is at its highest and no family has to lose a member from a preventative illness.”

The Tobacco Control Bill, which was first introduced to the Parliament in 2011, is aiming at protecting the public from second-hand smoke and preventing underage tobacco consumption. Health warnings on tobacco packaging are now mandatory and a ban of smoking has been placed on indoor public places as well as some specified outdoor places. The new law also regulates tobacco advertising, sponsorship, promotion, manufacturing and distribution. For current smokers who wish to give up smoking, the Government set up support strategies to help them overcome their addiction.

A National Tobacco Control Council has also been created in order to advise and work with the Minister of Public Health and therefore assure citizens that tobacco control programmes are enforced and well administered.