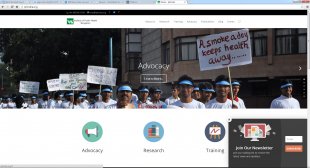 The International Tax and Investment Center (ITIC) is organizing the 12th Asia Pacific Regional Forum in New Delhi, India from 5-7 May.

ITIC has a number of tobacco companies as part of its board of directors and has produced many publications on several areas related to taxes and prices, investment and illicit trade in tobacco products.

The Institute of Public Health (IPH), a Bengaluru based organization, wrote to the Union Minister of Finance requesting him to withdraw participation of his State Minister and ministry officials from the event and we followed up the issue in the media.

Subsequently, the State Minister’s name was removed from the event website and programme agenda.

The World Bank is an intergovernmental organization that is accredited as observer to the Conference of the Parties (COP) of the WHO FCTC and the FCTC Secretariat has concluded a cooperation framework with the Bank on several areas of work related to implementation of the Convention by the Parties. See para 18 of this document: http://apps.who.int/gb/fctc/PDF/cop6/FCTC_COP6_18-en.pdf

The timely action by members of the Framework Convention Alliance in different countries in the Asia-Pacific in response to an alert from HealthBridge Foundation has prompted several speakers and delegates to reportedly pull out of the event.

Still, the website of the ITIC-event says “Government and Parliamentary Delegations from the following countries have confirmed their participation: Australia, Bangladesh, Cambodia, Chinese Taipei, India, Indonesia, Korea, Laos, Malaysia, Myanmar, Pakistan, Philippines, Solomon Islands, Tajikistan, and Thailand.” Most of these countries are Parties to the WHO FCTC and are obligated to protect their tobacco control policies from the influence of tobacco industry. http://www.iticnet.org/aptf2015

The civil society will continue to work with Governments to put in place long term deterrent policies to avert such conflict of interests in the future.

Earlier, before the sixth session of the Conference of the Parties, it has been brought to the attention of the Convention Secretariat that ITIC, in cooperation with the Eurasian Economic Commission, is organizing a briefing on tobacco excise taxation in Moscow on 12 October 2014, one day before the opening of the COP, and inviting tax officials from Parties and WHO Member States that are observers to the COP to participate. The Convention Secretariat responded rapidly, by bringing to the attention of the Parties that ITIC has a number of tobacco companies as part of its board of directors; the Secretariat also advised Parties and accredited observers to the Convention not to participate at the event in the light of their obligations under Article 5.3 of the WHO FCTC and its guidelines.