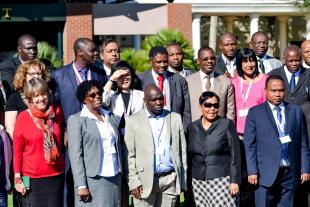 From 6 – 8 May 2015, Botswana was host to a 2.5 day multisectoral workshop on the Protocol to Eliminate Illicit Trade in Tobacco Products. Delegations from ten countries from the African Region of WHO, namely Botswana, Burkina Faso, Democratic Republic of the Congo, Gambia, Lesotho, Madagascar, Mali, South Africa, Swaziland and Togo, met in Gaborone in order to exchange experiences with regard to the Protocol.

The attending Parties to the WHO FCTC shared with one another experiences about the process of ratification of the Protocol, as well as the implementation of provisions of the Protocol, including the tracking and tracing system. Participants from health, finance, customs, justice and other sectors of government discussed with experts of the Convention Secretariat, the WHO Regional Offices for Africa, the Secretariat of the Southern African Customs Union (SACU), and representatives of the World Customs Organization on how to move forward in the ratification of the Protocol. While all WHO FCTC Parties expressed an interest and the will to become Parties to the Protocol, several obstacles were mentioned: the interference of the tobacco industry, challenges in multisectoral collaboration, changes of government as well as a need for more information on good practices of implementation of Protocol provisions.